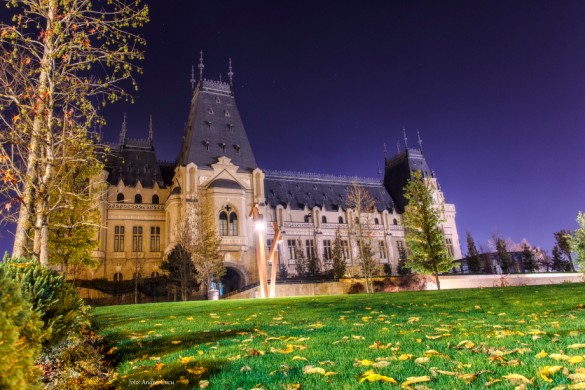 The Moldova National Museum Complex – The Palace of Culture

Short description: On the field around the imposing Cultural Palace in Iasi, founded on the grounds of the old principality palace, it was before 1434, the Rulers Court (or the Princely Court of Moldavia). Because of numerous fires and attacks, the walls and the buildings of this ruling headquarters of Moldavia needed repeated restorations and arrangements ordered by the rulers. In 1784 a large fire burnt the principality’s courtyard, destroying it. Alexandru Moruzi, for the second time the ruler of Moldavia, (1802-1803), orders its renovation. The building of the new great palace lasted till 1806, when it was greatly inaugurated. But after not so long the new court was again brought to ruins by another fire. It would be again rebuilt after 13 years. The new palace, the Ruling Palace, as it was called for the time being, on the 5th of January 1859 Alexandru Ioan Cuza was chosen to be the new ruler of Moldavia, the palace becoming an important administrative institution. The palace was dismantled in 1904-1906. During World War I, the constructions were halted because of a lack of resources but the finished building was completed on October 11, 1925, officially inaugurated by King Ferdinand I of Romania and bearing the name of Palace of Culture. Until the year 1955, the Palace of Culture housed the Court of County Law, and also other public institutions. The construction is built in a flamboyant Neo-Greek style. It has 298 large rooms with an area of over 36.000 square meters. The bell of the central tower, made at the beginning of the 20th century, tunes at the exact hours the Union dance. The palace shelters also a show and concerts room, and a conference hall. The statue of the Stephen the Great, in front of the palace, is the work of the French sculpture of Emmanuel Fremiert (1883).
The Museum Complex hosts four museums: Art Museum, Moldavia’s History Museum, Ethnographic Museum of Moldavia and the “Stefan Procopiu” Science and Technique Museum.
Visiting hours: 10:00 – 17:00, Tuesday to Sunday (closed during the holidays).

Short description: Dosoftei was the Bishop of Moldavia and Suceava between 1671 and 1686 and played an important role in the Romanian culture and education. The Dosoftei House, also known as “the arch house” was built in the 17th century, originally belonging to the “Saint Nicholas” Church. In 1679, bishop Dosoftei settled the second typography in Moldavia. The Dosoftei House sheltered since 1970 the Old Romanian Literature Department of the Romanian Literature Museum in Iasi, where many original exhibits can be seen. The books printed here are displayed in three rooms and the visitors can see how the exhibits circulated and interfered with the other regions.
The building is situated in the old part of the city, near the Palace of Culture and not far away from the ‘Three Hierarchs’ church.

Short description: The Museum of the Union is located on 14, Lapusneanu Street, in the city center and contains a valuable gallery of modern history. The museum building is itself an important museum exhibit. Even without any furniture, the building is a point of attraction. The architectural style, the positioning in its urban landscape and especially other qualities of the building served as the residence of Prince Alexandru Ioan Cuza (between 1859 and 1862).

Short description: The National Theatre Vasile Alexandri can be found in an elegant building. Constructed in Baroque style, instead of the old town hall between 1894 and 1896  the building of the National Theatre is considered to be the oldest and the most beautiful place of this kind from the country. The building planes belong to the famous German architects Fellner and Helmer, who projected similar building from Vienna, Prague, Odessa, Zurich.  Inaugurated with the theatre, the electrical factory marked the beginning of the electric lighting in Iasi. The building of the National Theatre in Iasi is a real architectonic jewelry sheltering real art monuments: The curtain, which represents in the centre a life allegory, and on its right the union allegory of the Romanian Principalities (Moldavia, Transilvania, and the Romanian County); the Iron Curtain, the ceiling that represents heavenly  allegories, being illustrated with nymphs and angels and framed in a rococo structure; the Venetian  crystal  chandelier with 109 bulbs. Now it shelters also the Romanian Opera.

Short description: The Natural History Museum of Iaşi was established on February 4th, 1834, at the initiative of some members of the Doctors and Naturalists Association in Iaşi. It is the first Museum of this type established in the Romanian Principalities; as a cultural institution, it aims at showing the “terrestrial and underground richness of Moldavia, as well as interesting curiosities from other parts of the world”.

The House of Vasile Pogor

Short description: The house belonged to the boyar Vasile Pogor, who was chosen three times mayor of Iasi. In the Pogor House took place for a long time the Literary Society Junimea.

Short description: The house was built around the beginning of the 20th century. The headquarters of the magazine “Literary Writings” was installed here on the 8th of January, 1919, bringing together famous Romanian writers such as: M. Sadoveanu, G. Ibraileanu, G. Topirceanu, and Demostene Botez.

Short description: This special building was inaugurated in 1989 as a sign of deep gratitude for Romania’s most famous poet who had died 100 years before. Specialists and visitors from all over the country and from abroad agree on the Eminescu Museum being a true monument of architecture suitable to celebrate and remember Eminescu’s talent and creativity.

Short description: The shack was built before 1850, in the suburbs of Ticau. The famous writer and story-teller, Ion Creanga lived here since 1872 till 1889, his death (in the New Year’s Eve). In 1879 Mihai Eminescu was also hosted here. The shack became a museum since 1918, being the first memorial house from the country. In 1989, due to the centenary period of the writer’s death, near the shack a large building has been inaugurated, where the documentary exhibit regarding his life and literary works is placed.

Kogalniceanu was a historic, journalist, writer, lawyer, diplomat and politician of Romanian society in the nineteenth century. It was the one who founded the magazine „Literary Dacia”. He was prime minister, foreign minister, interior minister and minister plenipotentiary of Romania in France.

Short description: This memorial house became a museum in August, 1970, and is found near the restaurant Bolta Rece. The house is also called Sonets Vila because here has lived and written Mihail Codreanu his sonnets for 60 years- the master of the Romanian Sonnets.

Short description: Here are exhibited personal objects, and manuscripts, photos, paintings an all this being directly linked to Otilia Cazimir’s works. The museum is annually visited by 3000 people.

Short description: It was founded on 26 of October 1860 and is the oldest university in Romania.  The actual building of the university was built between the years 1893- 1897, being inaugurated in the presence of Carol the 1st and Queen Elizabeth. The building is a combination of the classic and baroque styles, its great entrance leading in the “Hall of the lost steps”, decorated with paintings realized by Sabin Balasa. In front of the university can be seen the statues of AD Xenopol and M Kogalniceanu.

Short description: The library was established on 8 November 1839 and opened on 23 November 1841, carrying on the tradition of the activity and fame of the old library of Academia Vasiliană, founded in 1640. Functioning closely with Academia Mihăileană, founded in 1835, it had the double character of a school library and a public library.

The Roznovanu Palace ( the townhall)

The house shelters two museums: the memorial house of the writer Nicu Gane, and the Local Council Museum, Iasi. In the Nicu Gane Museum, there are exhibited original objects that belonged to the writer, manuscripts, photos, books, and paintings. The local Council Museum offers an image of the local administrative and cultural life, beginning with the 19th century. In the future will also open the mechanical writing objects museum.
Visiting hours: 10: 00- 17:00 from Monday to Sunday.

The Bust of Stephen the Great

Address: Harlau, in front of the Inn “Raresoaia”. In the middle of a circle with a beautiful floral arrangement, Iasi County.

Short description: Carved in stone by the young artist Ovidiu Ciubotariu the bust was uncovered at 25 October 1992, with the occasion of the manifestations dedicated to the filling of the 500 years since the works ending to the Saint Gheorghe Church, founded by the great ruler, and which is nearby.

The Museum of the town Harlau

Short description: To the western side of the house you can see the Museum of the town Harlau. The building where it functions is an old boyar’s house, with semi-basement and ground floor, with walls of 1 meter thick bricks. From 1875, over a century, it sheltered the postal office, but it belonged before to Vasile Ioan, a former mayor of the town Harlau in the second period of the XIX century. After some restoration works in 1987, it was organized here the Museum of the town Harlau. The graphical plans (maps, plans, facsimiles, photos), and the objects from the windows, present us the history of Harlau and its surroundings, including it in the main periods   and moments of the national history, you can find between the exhibits the Paleolithic flints from Sticlaria, the Neolithic pottery from Cucuteni, the plan of the principality’s court, the glass objects from Parcovaci SA Factory; in museums hall is an ethnographical exhibit that includes carpets, popular costumes realized to Parcovaci and Sticlaria, and black ceramic from Poiana- Deleni. With the inauguration occasion, before the building was uncovered a bronze bust of Petru Rares (1527- m1538, 1541- 1546), a brilliant son of Harlau.