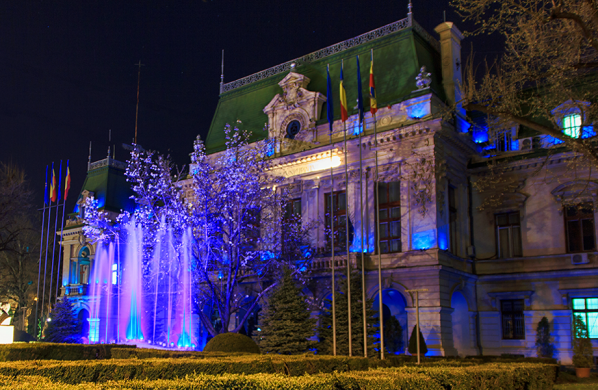 Romania - This name adopted in 1862, after the formation of the national state through the unity of the two Romanian principalities, Moldavia and the Romanian country, in 1859.

The official language is Romanian. As foreign languages, the most known languages are: the English language followed by French, and rarely German.

The flag: ( proportion of 2/3) three vertical stripes of the same dimension: red, yellow and blue. It was adopted as a flag during the revolution from the Romanian county in 1848.

Administration: the administrative division in counties, towns, and communes.

The administrative organization of the Iasi county comprises 2 municipalities (Iasi and Pascani), 2 towns ( Harlau and Targu Frumos), 93 communes and 420 villages. The county’s residence is the Iasi municipality, one of the most important towns in Romania, ( with a population of 303714 inhabitants at 1st of July 2002, thus being classed the 4th, after Bucharest Constanta and Timisoara). The population counted 821891 at 1st of January 2004, representing 3,8% from the whole Romanian population ( the Iasi county being placed 3rd, after Bucharest and Prahova); from the whole population 47, 1% lives in the country and 52, 9 % in towns.