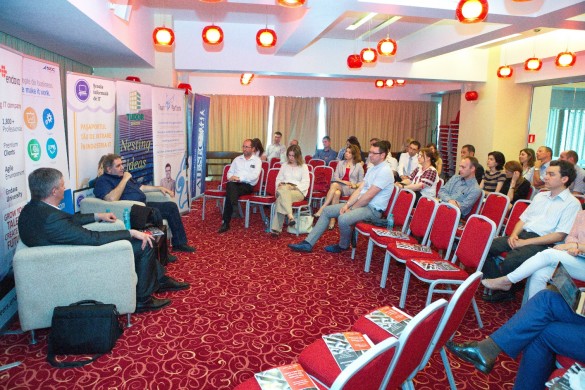 Varujan PAMBUCCIAN, speaking at a conference within the IT & Outsourcing Community in Iași: “We need to speed up the transition from the software factory model to that of a research-development center or to services with high added value.”

On Thursday, 4th June, Varujan Pambuccian took part as a speaker at two events organised in Iași.
The Event Power L(a)unch (8th edition) is especially designed for opinion leaders from the IT & Outsourcing industry and the relevant academic environment. Such themes as new prospects in the IT industry and incentives for the long term development of the IT & Outsourcing sections in Romania were approached.

The Conferencte “Disruptive Technologies” is destined to all those interested in the IT & Outsourcing industry, both Bachelor and Master students from the „Al.I.Cuza” University and the „Gh.Asachi” Technical University in Iași. The subjects tackled included viewing research as a pillar of Romania’s development and the four technologies that will change the human society.

According to Dan Zaharia, the organiser of this event, the IT & Outsourcing industry engages in Iași over 7.000 specialists, having the ability to grow in the next 5 to 10 years to over 20.000 employees in Iași. The IT & Outsourcing companies with the most employees at the moment are: Xerox, Continental, SCC Services, VEO Worldwide, Endava, Ness, Centric, Amazon, GfK, Unicredit, Capgemini, Yonder, Atexis, Sonovision.
What’s more, recently, at the outsourcing industry awards gala Romanian Outsourcing Awards 2015, the community in Iași was praised with several prizes:
The Computer Science Faculty – award for the best collaboration between the academic and the corporate environment
The Economics and Business Administration Faculty – award for the best academic program of the year
QODEMO – special award for a start-up

At the end of the two events, Varujan Pambuccian stated that:

“I met in Iași only people who know what they are talking about and who are able to speak directly, clearly and intelligently about subjects of interest to them. I met a tightly-knit professional community that knows how to sensibly differentiate between the competition and work-related aspects, and things they have in common and that unite them. I also met a place with an exceptional coherence between the educational and the industry environment, which I took as a sign of great advancement and which ensures a predictible development. The fact that there is a bond between high school, university and industry, a bond built wisely and over time, makes Iași an almost unique ecosystem in Romania. ”

The IT companies will need to invest in research, because otherwise we risk witnessing a decline of the industry. Romania is not competitive anymore as far as workforce costs are concerned, seeing that cheap laborers are now coming from Africa and Latin America, where the young population is numerous and well prepared, reckons Varujan Pambuccian.

Concerning the support oferred to the IT&Outsourcing industry, Varujan Pambuccian claims that “there are things we should keep and expand, such as tax free incomes for specialists and the freelancers’ payment method, but we need to speed up the transition from the software factory model to that of a research-development center or to services with high added value.”

“Most of the companies in this field offer outsourcing services, a sophisticated form of loan, but that doesn’t bring any added value. Today, the programmer coming out of school is a laborer in a sotware factory. I believe that college should not produce programmers on an assembly line, but rather they can be formed during high school. In universities, we should develop the future analysts and software architects. At the same time, we need people that sell highly added-value products, created by specialists, to the real markets”, emphasized Varujan Pambuccian.

Thereby, the IT & Outsourcing industry in Romania needs marketing people, who can apply their knowledge in the US and in the west of Europe, also, sales people and, not least, networking in big markets, including for start-ups.

He states that a bigger emphasis should be placed on undergraduate education, which should be profoundly changed: “We should develop programmers during high school and software engineers during college. From my point of view, a programmer should know at least two programming languages and an assembly one”, says Pambuccian.

Varujan Pambuccian is a deputy in the Romanian Parliament and a member of the Information Technology and Communication Committtee within the Chamber of Deputies. (www.pambuccian.ro)

Both the Power L(a)unch event, as well as the “Disruptive Technologies” conference are organised by Extind Management (www.danzaharia.biz), with the help of partners Ness România, SCC România, Endava, Scoala Informala de IT and Tudor Office Center.