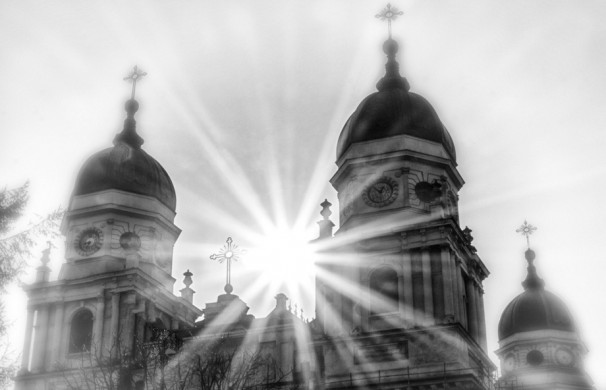 The Metropolitan Cathedral, Iasi (Church of Moldavia and Bucovina)

Short Description: The idea of creating a higher, monumental church belongs to Bishop Veniamin Costachi. The construction lasted until 1826 and the Blessing of The Cathedral (23 April 1887) served as a national event, King Carol I being present as well. The Cathedral is a monumental, rectangular construction, marked in the corners by four separated spires. The architectonical style is inspired by the Italian Renaissance in its late forms, resembling “Trinità dei Monti”, from Rome, with Baroque elements dominating the interior and exterior decorative features.
The Cathedral is dedicated to Saint Parascheva, to the Presentation of Jesus and to Saint George. The Metropolitan Cathedral has 3 celebrations along the year: The Resurrection of Christ on the 2nd of February, The Great Saint George on the 23rd of April and the Saint Pious Parascheva on the 14th of October).
The Metropolitan Cathedral is listed in the National Register of Historic Monuments.

Short description : The Saint Theodora Monastery was grounded for the monasteries from the diocesan center of Iasi. The sisters, who work very hard for  the different activities of the center, at cleaning, receiving official delegations and pilgrims, can pray every night, on Sundays, in their monastery, the former metropolitan cathedral – Saint Gheorghe. During the day, the same church is the chapel of the theology students.

Short description: The Monastery was built in the seventeenth century, during Prince Vasile Lupu’s reign (1637-1639) and was blessed by Bishop Varlaam. The construction was meant to be a royal burial ground and it is known in the whole world for its history and beauty, combining various architectural elements and styles with precious materials and decorations. It began its liturgical programme in January 1990, reopened after 40 years of interdictions.
Several Romanian royal figures are buried in the church: Tudosca (Vasil Lupu’s first wife) and Stefan Voda, their son; prince and scholar Dimitrie Cantemir; and Alexandru Ioan Cuza, first ruler of the United Romanian Principalities.
The Monastery is listed in the National Register of Historic Monuments.

Short description: It’s a Romanian Orthodox Monastery for nuns, built by the ruler Petru Schiopul, the Church being consecrated in 1584 and rebuilt in 1996. The nuns present here have among occupations tailoring and embroidery.

Short description: The Cetatuia Monastery is one of the finest works of art from the Moldavian region, founded by sovereign Gheorghe Duca between 1668 and 1672. A Greek printing press used to function here, printing books for other foreign churches. Among other works, the complete work of Saint Symeon, Archbishop of Thessaloniki, was done here in the 18th century.
The Monastery also has its own museum, serving as another tourist attraction, together with the tower called “Pilgrim’s Dinner”, from where people can have a beautiful view of Iasi.

Short description: The Bucium Monastery, with the patrons of church The Sunday of All Aton Saints, founded in the XIX century on the place of a monastery from the XVIII century. It was for a while a branch monastery of the Romanian convent Prodromu from the Saint Athos Mountain. A silent place, guarded by the town’s noise, the Bucium monastery attracts to its officials lots of believers.

Short description: The Barboi Church was built between 1841 and 1844 on the foundation of a church which dates from the year 1615. The Church is dedicated to Saints Peter and Paul. The interior is built from rock and brick and the spire presents neo-Gothic Roman characteristics.
Sovereign Ioan Sandu Sturdza and writer Alecu Russo were buried in the church’s court, and the tower used to be the library of Costache Conachi, a Romanian writer.

Short description: The Saint Nicholas Church was built between 1941 and 1942 by Stephen the Great, at the time ruler of Moldavia. The church is considered the oldest religious building in Iasi. The church is located near the former Royal Court, where the Palace of Culture is placed now. A lot of rulers of Moldavia, such as Despot Voda and Alexandru Ioan Cuza were anointed here.
The Church was rebuilt from its foundation in the 19th century by Lecomte du Nouy, a French architect, who tried to keep the original plans presented by Stephen the Great.
This church used to serve as a Metropolitan Cathedral, Dosoftei the Moldavian Metropolitan, founded a printing house in the adjoining building, today known as Dosoftei’s Residence.
The exterior architecture combines brick, stone and other elements such as paintings in a beautiful and traditional way.

Address: Harlau
Short description : The Saint Gheorghe church, the architectural jewelry of Harlau, is one of the most succeeded monuments of the period of Stephen the Great. From an architectural point of view, the church is a combination between the  Byzantine and the Gothic styles. In the exterior, the church was initially decorated with the quarry stone, but it was painted during Petru Rares. Actually it is the oldest church from Moldavia, which was painted on the exterior walls, but after some it deteriorated and in 1791, because of some repairing works done by the Chancellor Mihai Racovita, it was plastered and painted. In 1897, the restorers removed the painting that, replacing it with the actual face from stone, carved in the form of small rectangular. Besides the valuable mural  painting, which makes out of the Saint Gheorghe a real picture gallery, on the interior walls, especially in the shrine, are numerous writings. They are a real historical chronic. These writings remind of the old church helpers and realizations of some rulers.